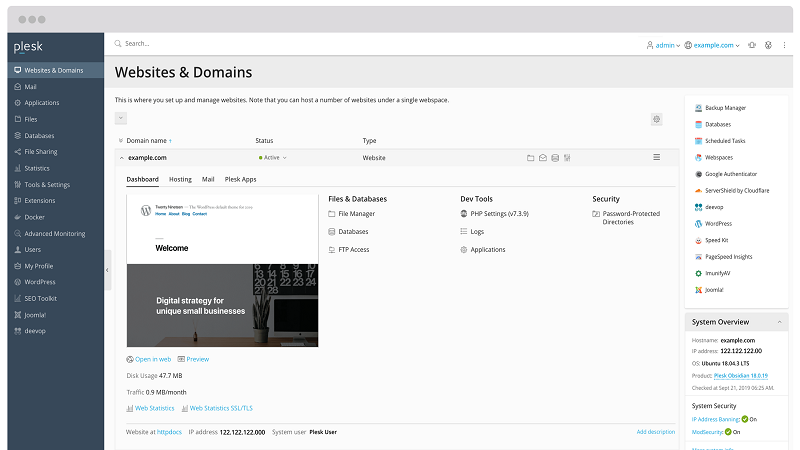 It is developed by Plesk International GmbH, with headquarters in Toronto, Canada and Schaffhausen, Switzerland, and offices in Barcelona, Spain, Cologne, Germany, Tokyo, Japan, and in the Siberian city of Novosibirsk, Russia, where it was originally developed in 2000.

The hosting automation software was initially released by Plesk Inc. and first went live in 2001. In 2003, Plesk was sold to SWSoft, which became Parallels in 2008. In March 2015, Parallels renamed the service provider division to Odin. In December of the same year, Plesk became a separate business entity. And in 2017, Plesk was acquired by British Oakley Capital Limited and has since been a part of WebPros, a global SaaS platform for server management. Currently, WebPros comprises Plesk, cPanel, WHMCS, XOVI, and SolusVM.

Plesk was founded back in 2000 by Dimitri Simonenko when Rackspace became Plesk’s first customer. Two decades after its first release, Plesk software operates on more than 350,000 servers globally and automates more than 11.6 million websites and 15.7 million mailboxes for customers in 140 countries. Plesk’s control panel allows its users to set up new websites, reseller accounts, email accounts, edit and create DNS entries, and many more, through a web-based interface.

Plesk’s products and services aim to provide a ready-to-code environment and strong security across all layers and operating systems. Key features and solutions include the automation and management of domain names, email accounts, web applications/CMS, programming languages, databases, and infrastructure tasks.

Plesk’s extensions provide extra tools, features, and services to users. Their purpose is to enhance how users work and interact with servers and websites. In particular, they serve a useful role when dealing with specific website areas, such as SEO, Security, Email, WordPress, and more. Plesk has over 130 extensions in the Plesk Extensions Catalog – available in Free, Freemium, and Paid licenses. The Lighthouse Extensions are a set of most popular solutions among users.

Extensions can be bought individually or in bundles. Each bundle or feature pack offers a set of extensions to create niche solutions for key website areas, such as Security, Backup, Hosting, and WordPress. The current set of available bundles is always up-to-date on plesk.com.

Plesk sells all three licenses for a monthly or annual price directly. All three editions can also be obtained from official license resellers.

In March 2018, Plesk announced end-of-life versions price increase, becoming its first price adjustment in 18 years of business. The company raised the prices of all Plesk licenses that had versions earlier than 12, alleging it was to cover the increasing cost of support and management over the past two decades. Following the announcement, Plesk created a FAQ page to clarify any questions about the new pricing adjustment.

If a Plesk license is purchased from one of the Plesk partners, technical support is the corresponding partner’s responsibility. Plesk partners are fully trained and deliver best-in-the-industry support for Plesk products running on their infrastructure. For those who wish to access Plesk support despite having bought the license from another source than the Plesk online store, Plesk support subscriptions are also available for purchase.